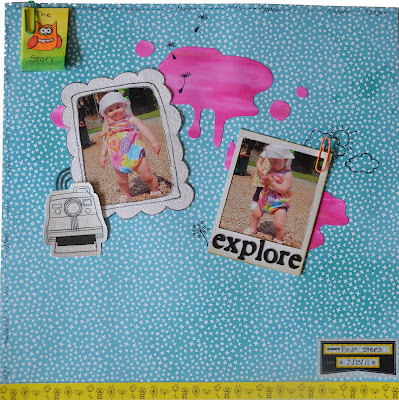 So I've been playing around with my scrapbooking again.  This is a simple page that acknowledges Moose's first steps.  I just love the bright happy blue with the bright pink and yellow. 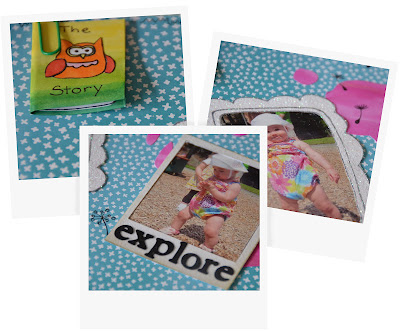 I put lots of doodles on this page. I guess I was just in a doodle mood.  I put a partial doodle boarder with dashes and zigs.  Then added some flowers and some lines and put in a few clouds and a sun been missing the sun and summer warmth.  I woke up to a house that was 65 degrees...berrrr. I almost wanted to turn the heat on, but I just couldn't get myself to do it. 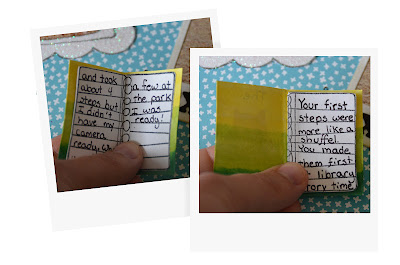 I decided to put my journaling in a little mini book I made.  Moose got really excited about it being a "baby" book.  Anything that is little is a "baby" right now.  We have baby pancakes, baby blueberries, baby tissues and the list just goes on and on.

Posted by Saskia at 8:12 AM No comments:

I wanted to create a page that captures how my daughter says peek-a-boo or should I say peek-e-boo.  I had a lot of fun playing around with this page and managed to captured some photos of my progress as I went along.

First I chose my photo and paper.  Then I got out some water color and started to paint.  At first I made some clouds, but they were looking rather sad so I just made and "artistic" blob.  You can never go wrong with blobs.

Instead of putting my photo on top I decided to cut out where I wanted it and laid it underneath.  It definitely adds a new look without a lot of effort.

I then made these half chevron shapes and cut them out.  I worked my way down one of the water color strips and made some more water color blobs and put them behind each cutout.  I was a little disappointed that the lime green dried more yellow.

Then I sewed on some clay embellishments.

I had my sewing machine out so I sewed around the photo and around this flag.  It was too much blue at first so I cut another smaller flag out of the paper and sewed it on top.  That flag was lonely so I cut out another flag from the watercolor blobs.

I glued my tittle down and did a little bit of journaling and I was done! It really turned out to be a fun pages.
Posted by Saskia at 2:38 PM No comments: 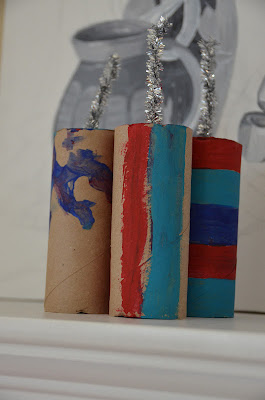 I know the 4th of July has come and gone, but I had to share Moose's creation.  Just cut up some paper towel rolls and then cut a circle from some cardboard and glue it on top.  Poke a pipe cleaner on top and glue it on or poke to holes and twist it up to make your firecracker.  Let your toddler paint it and you're done!
Posted by Saskia at 9:00 AM No comments: 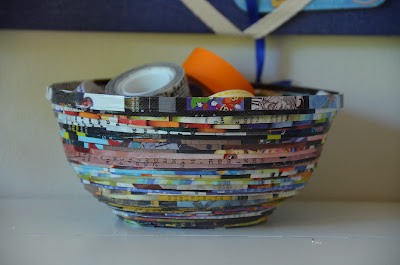 I recently have been accumulating a lot of washi tape and had no place to put it.  So I made a bowl to hold them all on my desk.  Washi tape is so cute.  I don't want to hide it all in a box in the drawer.  I'm totally hearting the bowl.  It is just like the ones I used to make back in high school.  It's almost as fun as the notes I used to write and fold up in cool origami shapes.  I kept some notes from back then because I think they are going to be a lost art form with all the texting going on.  Maybe I should make some tutorials on how to fold hand written notes so the art isn't forgotten. LOL! 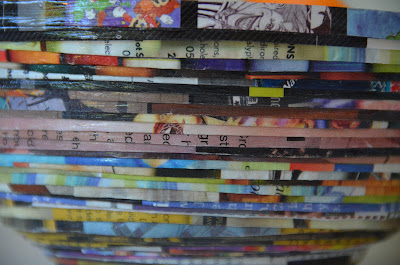 I have a favorite spot in this bowl.  It is in the upper left of the bowl.  You can see Mario! 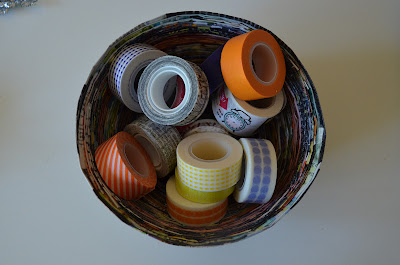 Oh washi tape makes me so giddy!
Posted by Saskia at 2:02 PM No comments: 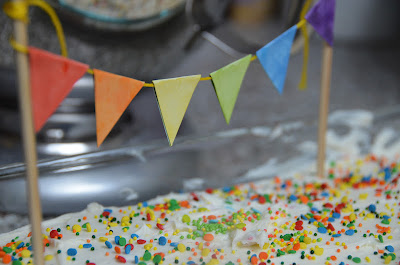 My hubby's b-day was at the end of June, but we celebrated it a few days later.  I wanted to make his cake a bit more festive so I made these mini birthday flags.  I made big felt flags like this a few years ago and now whenever it is somebody's birthday I hang them up.
Can you see the repair work I did?  Originally I had set the cake up in a different location.  Right as I was about to snap a picture, Moose put her hand right into it and dug out a little chunk!  Oh toddler hood, you bring me such daily adventures.  So I had to move the cake to a less attractive location. 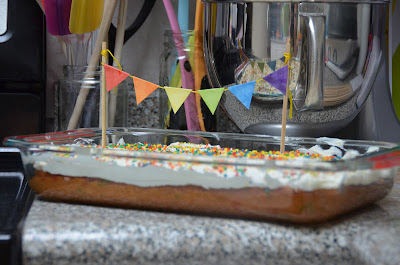 To make them I took a wooden skewer and broke it in half.  Then I took some floss and glued some paper diamonds folded in half on to the string.  I tied the strings up and stuck it in the cake for some simple and festive fun. 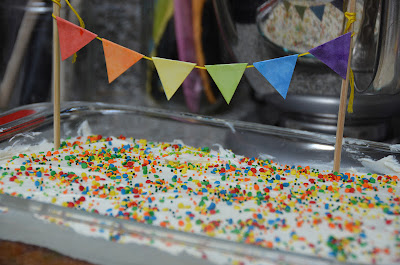 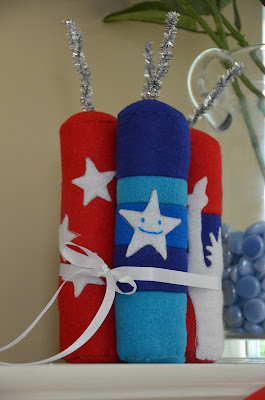 With 4th of July almost here, I have just finished my firework softies.  I love how they turned out! 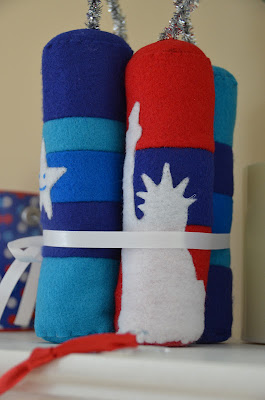 My favorite one is the statue of liberty because she is a bit differant then all the normal 4th of July stuff you see.  In other words, not a star.  So many of the decorations are stars and some lately have been kind of nautical themed.  I'm so not into nautical.  I do have plans to make a few more, but I fear I will not have the time to get them done for this year.  Wouldn't one with USA on it be cute? Oh and I think it would be great to just have one with polk-a-dots.  If I get really ambitious I might even make one with George Washington's head on it.

I made the statue one by looking at a picture and freehand drew her.  I think she came out well.  I traced out stars for the red one and the blue one.  The blue one is based on one that I saw on Punk Projects.  It's a super fun project and I love how it sits on my mantel. 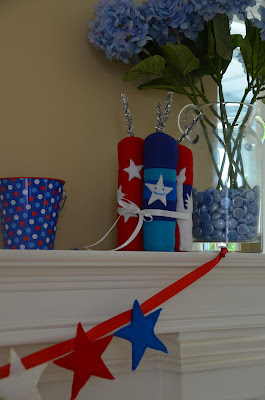 Have a happy 4th!

Posted by Saskia at 8:00 AM No comments: