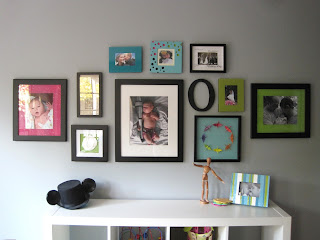 It took me a while, but I finally finished putting up my photo wall.  I've been wanting to do this for so long, but I wasn't sure how to go about it.  It always looks great when I lay it on the floor, but everything gets off when I hang it up.  So for a week or two I had newspaper rectangles on the wall, which made for an interesting conversation starter when I had little Moose's playgroup over.  Then I found the 3M photo hanging strips and boy did that help me.  I never have had any luck when nailing a nail in the wall.  My nails would always be a bit high or a bit low and same thing when I used the hooks, but now I could just stick the picture on the wall and it stuck right where I wanted it.  I don't know why I never had seen them before. 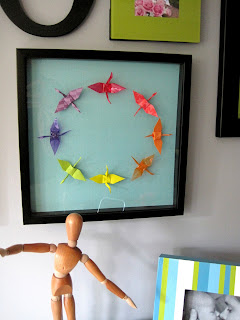 The last piece that made it up was this photo box that now has the origami cranes in it.  For the longest time I couldn't decide what was to go here. 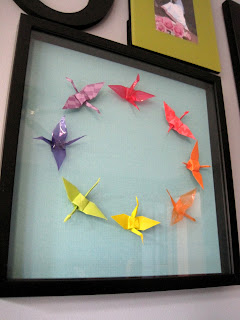 I love making origami cranes, I could make them in my sleep. 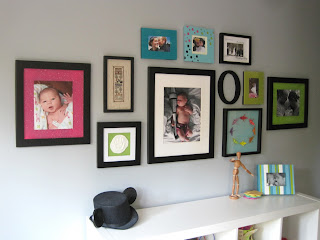 I tried to mix it up with more then just photos.  I have a special cross stitch that my friend made for me, my Moose's hand print, an initial (even though O isn't the most exciting of letters), and the shadow box of origami cranes. I used a lot of the frames that I have had for a long time and some didn't make the cut, and that's the hardest part of doing a photo wall.