May 01, 2010
So after I had everything all cut and placed out, I realized I had no idea on how to attach the bunnies on.  First I pined everything and tried doing a zig zag stitch, but it wasn't working well and looking awful.  I asked a few people I knew about ways to go about it and most of them said to try some double sided webbing or to try iron-on adhesive.  Well, I found some Heat n Bond stuff and decided to give that a whirl.  The first bunny I tried ended up making half of my ironing board all sticky (I then realized maybe I shouldn't have cut out the bunnies yet).  So I ended up having to put wax paper under the bunnies. 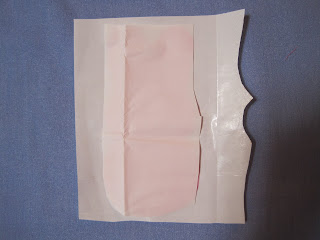 The stuff told me to use medium heat, but it wasn't hot enough to get it to stick so I had to turn it way up. Once it was on the back side of the bunny, I trimmed it, so it wasn't sticking to my iron when I put it on the blocks. It's not trimmed yet in the picture below. 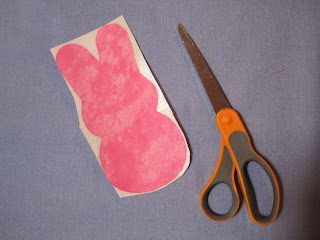 Then I just peeled of the paper and ironed it onto the block. 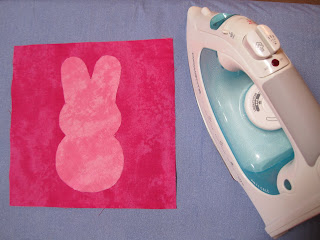 It made it a little stiff, but it wasn't too bad.  Now my one friend had done it like this before and just used some puffy paint to give it the look of it being sewed on, but this is going to be for my baby and I want it to be attached really well.  I tried to do a basket stitch, but I didn't like how that was looking (and I had to do that all by hand), so I went back and played around with the zig zag stitch again.  The zig zag worked a lot better this time around.  I think the pins were making it too bunchy and too wiggly before. 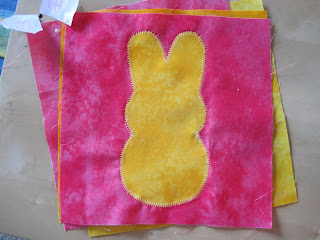 Of course by the time I'm almost done, my aunt called me and told me another way to attach, but it had a lot more work involved.  She said something about the using the webbing and turning the bunnies 1/8 of an inch in and then sewing around.  I bet that would have looked a lot neater and help with fraying, but the instructions she was giving me made it sound a lot more complicated.  Maybe I'll try that way another time.