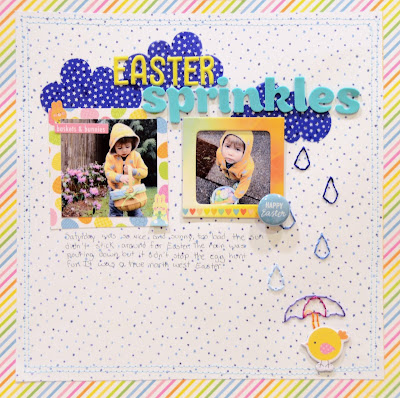 Happy Monday!  I actually got around to scraping some Easter Photos of this year already!  It is a record.  I'm usually a year behind lol! Anyways, I hope you enjoy this page I made for the Memory Nest.  This is the first year in Seattle (for the six years I've lived here) where it has rained.  My kids still had a blast in the down poor finding eggs.  It really was just about the worst weather we possible could have here.  I think in the county below us they might have even had a tornado!  The Puget sound averages one tornado a year and it only lasts for a second or two and does practically no damage.  We rarely even get any thunder storms. 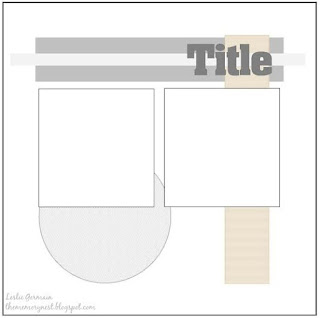 I hope you like my take on the sketch.  The strip down really spoke to me for turning it into rain.  I decided to sew some ombre rain drops.  Then I thought clouds would work well for the horizontal stripes in the sketch.  I was surprised just how many cloud embellishments I have.  In the end, I went with these dark blue transparent clouds.  I almost went with some yellow ones, but decided that they blended with the background too much.  Sorry my photo is a bit washed out.  My camera hates white backgrounds when I take them at night and I can only edit so much. My little helpers make it difficult to take the photos during the day.