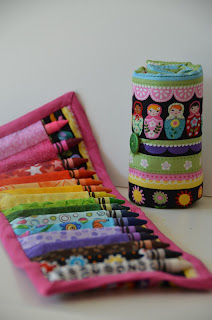 I used to keep Moose's crayons in a Ziploc bag when we went out and about, but she would just dump them all out and they would roll all over the place.  At home I kept them in a bucket and that too she would just dump and half of them would be rolling on the floor.  So I knew it was time to make a crayon roll.

Moose is loving it.  She spends a lot of time taking her crayons out and then matching the crayons with the right fabric spot and putting them back in. 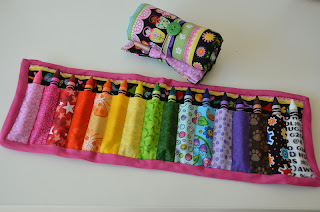 The first one I made does not have the bias tape around it (I personally like without it better), but that one only holds 14 crayons.  I thought 14 was a good number of crayons to have when you are out and about as 24 is way too many for a toddler.  Then I realized boxes of 16 crayons exist.  I had to make another one.

I first made these to hold Moose's twisty crayons (I hate all the plastic but she can't break them...and she refuses to use a broken crayon).  They also hold  the big fat crayons really well too.  If you want to make them for normal size crayons, I suggest folding down the holder row an extra inch or even an inch and a half.  So now to some instructions. 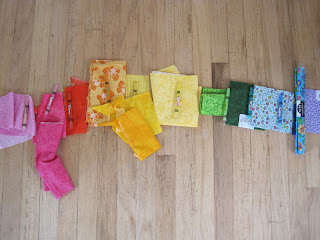 First gather all your fabric and try to match the bits to the crayons as best you can.  This is a great way to use up some extra fabric scraps that are laying around.  I used a bunch of scrap fabric that was left over from Moose's quilt (not the quilt I made but one a friend made for her and she was so nice to send me the extra fabric!)  Then cut them into the best 2 x 5 rectangles you can make. 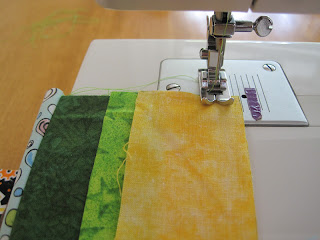 Now sew them into one nice long rainbow strip.  I did half an inch in because I like to have extra fabric and then trim it off later.  Your goal is to have each color strip be about an inch wide.  Once the strips are all sewed together they should be as long as your other two pieces of fabric. The key word is should be and my first attempt was better at accomplishing this then my second.  Trim the extra fabric from in between all the strips. 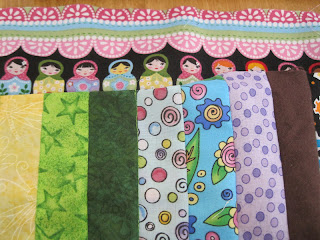 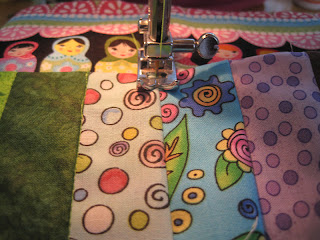 Next you will sew down each of the strips (but don't sew the ends especially if you are going to add bias tape around the edge and keep the bottoms open for now).  The first one I made I just used green thread for each one, and as long as you sew straight you shouldn't see the thread much.  The second one I made I kept changing my thread so the thread blended in a bit better. 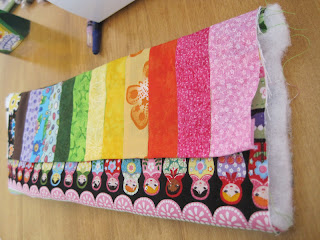 If your are adding bias tape- Lay your fabric with the outside fabric down on the table with the print facing the table, the batting on top of that, then the fabric with the rainbow strips on top of that and sew around all four sides.  The bottom edge and the one side I used half an inch, but I had some extra fabric on top that I didn't want the pattern to show so I actually did about an inch and trimmed off the extra fabric.  Sew on your bias tape along three sides (not the side you want your elastic on)

Now if you are sewing without bias tape edging- Lay your fabric with the rainbow on the table with the colors facing up, lay the outside fabric with the print facing toward the table, then lay the batting down.  Then sew around three sides starting with a long side then a short side and then a long side and then stop.  Turn project inside out (it should look like the picture now).  I sewed a half inch in all around. 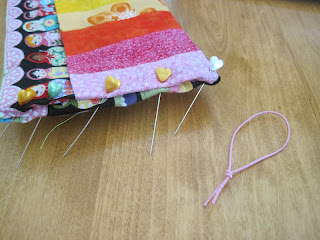 Adding the elastic without bias tape- You will want to fold in about hald and inch and pin.  I know my pining isn't the greatest...I have a fear of sharp objects. 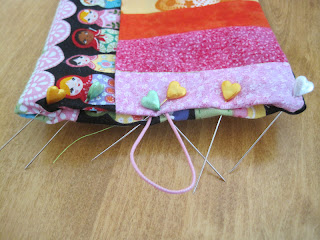 Put your elastic in between the folds and and sew over it a bunch of times so it stays in place really well. 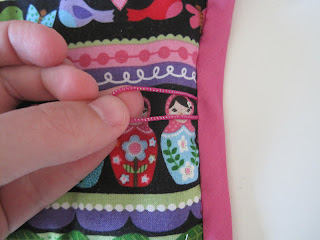 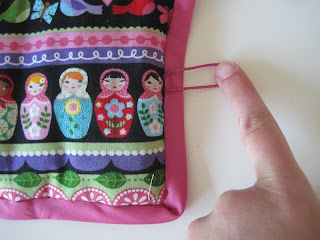 Adding the elastic with bias tape-  As you sew your bias tape around the last side you will want to add in the elastic so it lays like in the picture.  Sew it in really well. 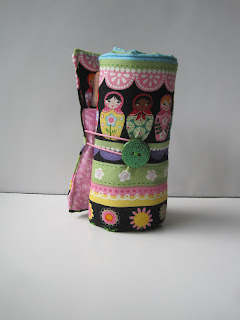 Finally you want to sew the button on.  To figure out the placement, first put in all your crayons.  Roll it up and pull your elastic a bit and mark the spot where you want your button.  Sew it on and you are good to go!

Please let me know if you try this tutorial out.  I would love to know how well this worked for you or if I miss typed anything.