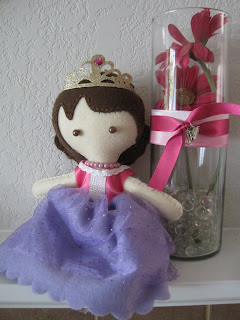 So I have been working away at making this cute little doll...well the doll isn't as little as I thought she was going to be.  I thought I would take the easy route as she comes from a kit from Feltworks.  The kit is for 8+, so I thought it would be an easy quick project since I am way past being eight.  Now in some ways she was easy, but in other ways not so much.  I definitely don't know any eight year olds that could happily make this.  At times matching up the felt was a little tricky with all the pre-punched holes and I'm still not all that positive I like all the holes.  It was especially tricky when I had to do the but/legs part.  I'm positive they messed up the instructions or forgot to punch some holes because that part I totally had to improvise on.  The other part that ended up being way more difficult then it should have been was all those stupid little seed beads.  I'm not sure why they have to go inside her, because they don't add that much extra weight or help her sit at all.  I do know that they are a pain.  I thought I could just poor them in, but whey I tried that they got stuck and next thing I know they were all over the floor, hundreds of them!  I spent forever picking them off the floor and I still keep finding them hidden in the carpet.  I'm also not a fan of how the crown attaches because it doesn't stay at all.  At least she came out cute! 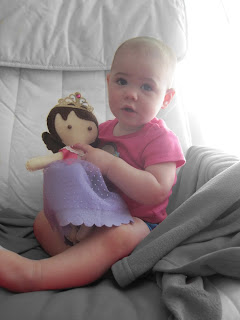 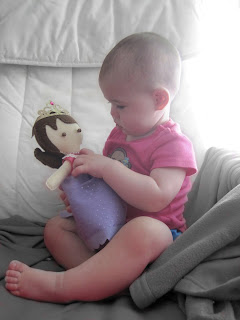